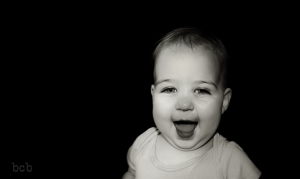 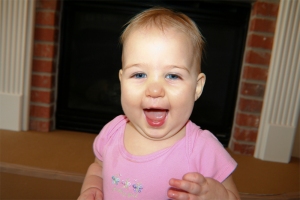 Pictured above is my older twin, Hillary. As I mentioned in my previous post, I’ve been trying a more focused approach to photography in order to work on composition skills both prior and post, and on different styles, etc. I also get friend requests on “how did you do that.” By no means do I consider myself a pro, but I do have some tricks I can share.

Currently, I’ve been working on portrait and b&w. In one of the Nightingale portraiture lessons, he points out that some of your best shots are often unintentional or surprising, meaning great, natural personality shots are not always staged in a studio. Consequently, the photographer will have to dig the portraiture out in post-processing and adapt to any limitations the original composition creates. So for this challenge, I took on not only a random image but a poorly composed image. Click Here to see the original.

For starters 1) it’s an almost dead center composition and leaves little depth for the eye 2) It’s inside with low light, a bright flash, and a toddler rushing toward the camera. It’s not the technical term but I call it the “atomic flash.” 3) the background doesn’t blur enough. It’s also horizontally off-center and not appealing, especially with the padded hearth so said toddler(s) do not crack open their skulls. 4) Boogers, drool, snot, shirt stains, etc—all the stuff kids always wear.

Onto the decisions and plans. The first thought would be to extract her from the scene and place her against a more portraiture backdrop. However, I really wanted to keep her stray hairs and extracting the hair completely is nearly impossible unless you have a perfectly contrasted backdrop in the original. But since her head was against a semi-black background, I could extract out most everything else into black. The black backdrop then opened the door for a b&w, duotone or other monochromatic. I blackened it out in Photoshop by adding a solid black layer underneath and then masked out the original image on top. Next, I took out the boogers, drool, spots, stains and tried my best to get out the reflected highlight around the mouth and bottom lip. Because this image was overexposed so much, those highlights plus part of her face (forehead, top cheeks) had nearly “blown” highlights. This ended up becoming the greatest limitation, and if it wasn’t for the practice, I would have stopped there. Once areas are blown, there is little exposure / darkening wise that can be done. Next I converted to B&W using the B&W tool in Photoshop (Channel Mixer worked great but the B&W tool gave me better control of the eyes and skin). Using the tool, I was able to soften the skin. Then I used two Curve layer mask for contrast. One to bring out the most and one to soften and then masked between the two to get the best balance. The last major step was to recompose. Since I had brought the background to black, I could change the canvas in any direction I wanted. I raised it, extended it to the left, and then finished with a crop.

I’m happy with the final in respect to how it started. I wanted to get a lower-key light effect, something that would be toned down and darker while still upholding key features. The overexposing really crippled that avenue.