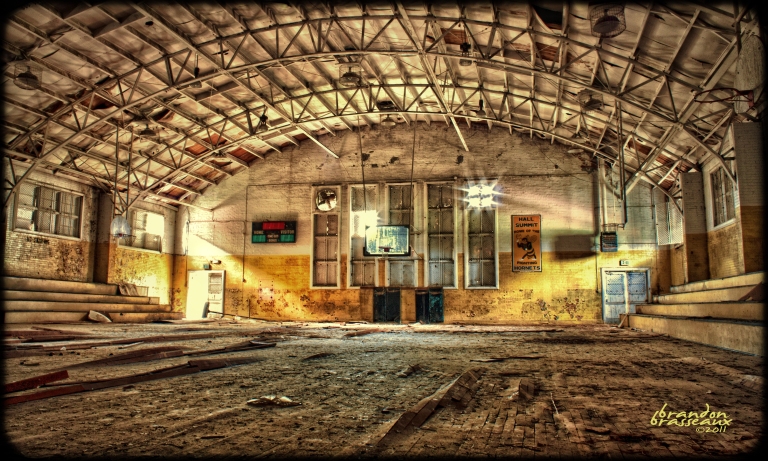 The Hall Summit Gym, home of the Fighting Hornets, in all of its glory. When we first entered the building, we squeezed through a busted window on the ground floor which turned out to be a needless effort since once inside the room, we found three unlocked doors we could have used. Every now and then, check the obvious first.  We were just trying to be cool urbexers, the savvy name for urban explorer. To make our entry even more laughable, the room we worked so hard to get into turned out to be a dead end. All the exits, the three unlocked doors,  only led back outside. Still, we were able to get some interesing shots from the room. The highlight of the room was the ceiling fans. The blades had all drooped down, worn from the humidity. They looked like wilted flowers.

We then entered the pictured gym. Despite what the picture leads on, it was overall dark (and dank). The adjoining locker rooms, offices and bathrooms were pitch black. I walked out into the court and the first few boards snapped like balsa wood under my feet. The state of decay was humbling. Just nine years (maximum) had passed since elementary kids were fast breaking down this court and some parts were buckled up nearly two feet off the ground.

Dave stepped out to get his tripod and I went to explore the locker rooms, a flashlight in each hand. I found a pile of basketball uniforms on a bench and when I opened the next door, I found a slew of uniforms neatly hung on closet rods. Further in the corner was a place cleared out where someone had taken up camp at one time. The uniforms were going to be a lock for a good photograph but I had never taken pictures in pitch black. I had to think about it so I ventured back out to the gym to get the easier shots first. Back out on the court, two enormous barn owls were circling. One landed and perched on the far basketball goal shown above. The other flew out the window to the left where the sunlight falls in curtains. Then the other owl followed suit. Periodically, the owls would give us a fly by, coming in from one window, circling around us, and then zooming out the other. I guess we were intruding their haunt.

Dave soon returned and we both began setting up for some wide angle shots of the gym. (Here comes the gross-out part. )I was focusing on some foreground objects that resembled horse feces. I stepped away from the tripod and pointed them out to Dave. Obviously, no one had been horse riding in the gym due to the brittle footing. As I’m looking down at these round objects, the owls made another pass and then it hit me what I was looking at—owl pellets, an extroadinary number of owl pellets. I stood and panned the area with a flashlight and a vast minefield of owl pellets illuminated around me in a horror movie fashion. Needless to say, I relocated my tripod to another area. For any interested, if you focus in on the lower left of the photo above between the 2nd & 3rd row of buckled floor, you’ll spot a few of these black balls of rodent leftovers. It does help explain how we didn’t encounter a single rat or bat throughout the entire complex.

As for processing, this was a 3-bracketed shot with about 20 second exposures. We were in the darkest corner going into the glare of the open windows and doors.  Not the best conditions but the opposite way wasn’t nearly as interesting. I merged the three photos into Photoshop HDR and applied a general tone curve that helped bring up the foreground light. I then used a variety of filters in Color Efex to get the toning and contrast. Once back in Lightroom, I applied a slight vignette and took the exposure down just a tad.

Also, if you want to see some great photos in different styles and perspectives of Hall Summit, check out Dave’s Flickr set.

4 thoughts on “Where the Rats Loose Their Bones”