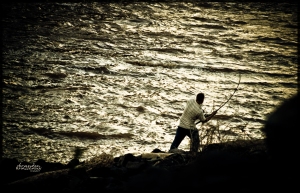 Another great subject for photographing at the lock and dam is that you can sit high on the rock bank and peep in on people fishing with the telephoto. I’ve seen some people pull out enormous catfish, but they mostly catch some kind of river carp that fit into the group of fish locals call “trash fish.” I’ve seen some people keep them for eating (it is Louisiana after all) and many just toss them onto the rocks for the birds. But apparently, many come here because they are easy to catch and fight hard, and the guy pictured above is engaged with one of these trash fish.  The guy here didn’t land his fish, the line snapping about thirty-seconds in.

As for processing, the photograph was a high ISO shot right at dusk with a long focal length. It was slightly underexposed so I decided to work with that aspect and took the RAW file down a little more and applied a heavy vignette to get started. At that point it had a Hemingway novel feel that I liked, the common thread of an isolated person struggling with something vast and indifferent. So next was the toning and I wanted something harsh. In Lightroom, I applied a split-tone of green & gray, with it biased heavily toward the gray tone but with the green super-saturated. Then I raised the clarity slider to bring out the water and applied a strong contrast tone curve.