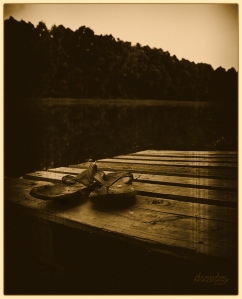 Right at dusk, I was walking along a patch of woods lining the river. I ducked into a dark trail that I presumed led to the river, but instead, it led to a little retention pond. At the end, was this wooden pallet with this set of flip-flops, slightly muddy and wet. The water area is stagnant and smells rancid since it is basically overflow from the river rise a few months ago that will eventually dry up. The light was fading fast and the trail was a dark, mosquito swarming tunnel back to the woods so I snapped a few and left.

Over the year, I’ve been able to find a few of these types of scenarios, scenarios that create a slight tension, a bit of story. Most recent was a book I found under the interstate overpass, and an umbrella in this one. And for these, I’ve always drifted towards an alternate processing style which I think is befitting, but I might have overcooked this one so I would be interested in hearing your feedback.

As for processing, the photos were tenfold brighter than I thought they would be as the new lens I was using preformed incredibly better in lowlight than I expected. I even went a full stop down wanting to get an underexposed version. I decided to aim for a generalized vintage film emulation. Fellow photobloggers Mike and Dave have done some interesting stuff with textures, so I decided perhaps this one called for a little texture.

First step was a crop as I wanted a squarer photo. In PS, I used some curve layers off of luminosity selections to lower the exposure in the lagoon water and bring it up on the pallet and flip-flops. I then duplicated and added a layer mask to the new layer. On the layer mask, I used Render Fibers filter until I got some harsh vertical striations. I set then selected that layer mask, then inverted the selection, and then created a new layer above. Using a soft brush, I painted with gray over the selection, getting the smudge and lines. I then brought it into SilverEfex to get the toning, grain & burned edges.