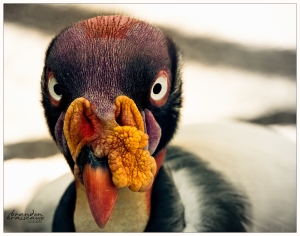 A king vulture at the Caldwell Zoo. I’ve never seen one of these up close. In most avaries or cages, they are usually withdrawn to the back or up high. The eyes on these things look incredibly fake or as if they are just a thin piece of paper with a black, abysmal hole in the center. For few months when I was studying literature and folklore, I had become obsessed with predatory and scavenger birds and their symbolism in various cultures. Vultures have a polarizing interpretation as they have been seen as angelic or a totem, with even some oriental cultures offering their dead to vultures so their souls can be carried to the heavens, and then there is the flipside, the vultures as demonic manifestations that conveyed souls to the not so heavenly. So I wonder which side of the coin this fella falls?

3 thoughts on “What? Do I have something on my beak?”