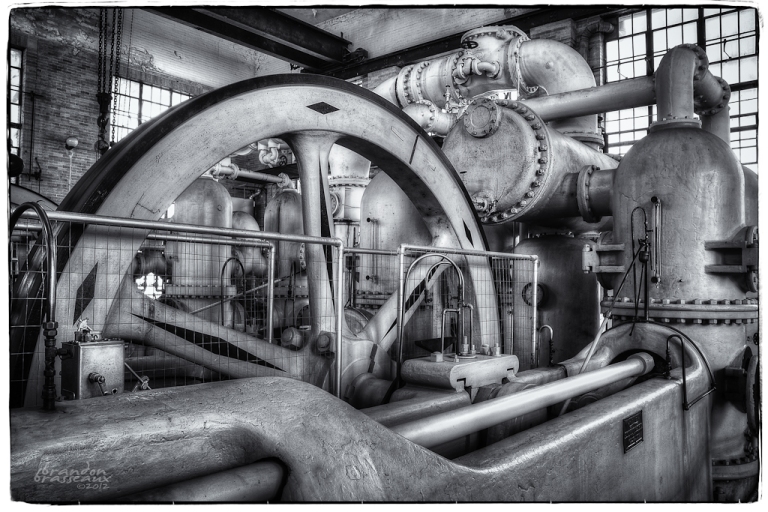 So the gardener gloves are off as in I’m done with spring flowers for a while. The above is the crank and flywheel of a pump at a historic water works that has been defunct (for the most part) for the last twenty years. It was completely abandoned for a short while, and thankfully, local effort made sure it didn’t turn into a slather of graffiti and broken windows. It is has now reached a “museum” state and some of the people overseeing the water works will walk you through the pumping station. The pumping station is not obvious from the roads and from what I found out, you have to be really, really looking for it in order to find the place. When I did, there was no one around but yet a convenient open door ;).

It wasn’t too long after I was in there setting up for a few shots that one of the overseers met me, and quite warmly which is rare in my photography experience. He then proceeded to take me to school on everything surrounding water purification with a big smack of engineering history. Then he offered me coffee and gave me free reign of the place.

One confession of mine in photography is that I don’t always do well on new grounds as I get a bit attention-distorted and overshoot to make sure I get a bit of everything. This time though, I left a lot of photographs in there and just took my time with a few. Knowing I can easily return helps with not pressing. Also, about five minutes into setting up I realized I had left my filter bag at home and was in desperate need of a circular polarizer. Most of the areas are housed in a warehouse style buildings that are lined with walls covered in window panes as in the above image.

Per the title, the above pump was built around 1920 and was a state of the art mechanism, especially for a small city like Shreveport. In its prime, it pumped about an average of five million gallons of water to the city per day. The pump actually still works as the overseer turned it on for me for a while. It doesn’t actually pump any water, but they let the engine run which allows the big flywheel to turn and stave off rust.

For processing, this was 7 exposures bracketed a stop between. The lowest was 4 stops down to get below highlight clipping as the sun was full on through the windows. I merged them together in Nik HDR Efex Pro as it afforded me a bit more control than Photomatix. All of the piping was an almond color which was similar to the walls. Besides a few red pipe handles, it was essentially a monochrome anyway, but seemed to work better in B&W. In Silver Efex, I did choose a “selenium” toning to bring out the metallic element, but it was slight.