Now—nearly two weeks later—a few more zombie pictures from Halloween. Needless to say I’m a bit backed up but it’s working out well as I have yet to really snag any Autumn sets I’m happy with. The above zombie was one of my favorites of the season, posing as the Chernobyl zombie replete with radioactive suit. Sadly this is the best one of her I had as I was experiencing some camera malfunctions, another reason I’ve been down on posting. Since the zombie festivals are in the streets with harsh shadows and crowds, I brought along my flash for some flash fill portraits. When I downloaded the RAW files, something was terribly wrong with most of my photos. I was miffed until I realized my high-speed synch on the flash had failed and was blowing many photos out by shooting at slower shutter speeds. Fixed that problem but still had some problems. I then found out my 17-55’s focus was out of whack. Oy. I have never had a major camera issue since I started photography,  but both came at the same time during a really cool event. Yuck.

Oh well, everything is back on track and here are some more zombies, the next one being my niece rocking the zombie cheerleader getup. This one was done with a bend toward something between an overly compressed HDR and the “Dave Hill” style. It’s no secret that I like fooling around with gritty processing so there is nothing like a zombie walk to get me going. Enjoy!

Our best in show zombie also freaked out other zombies. 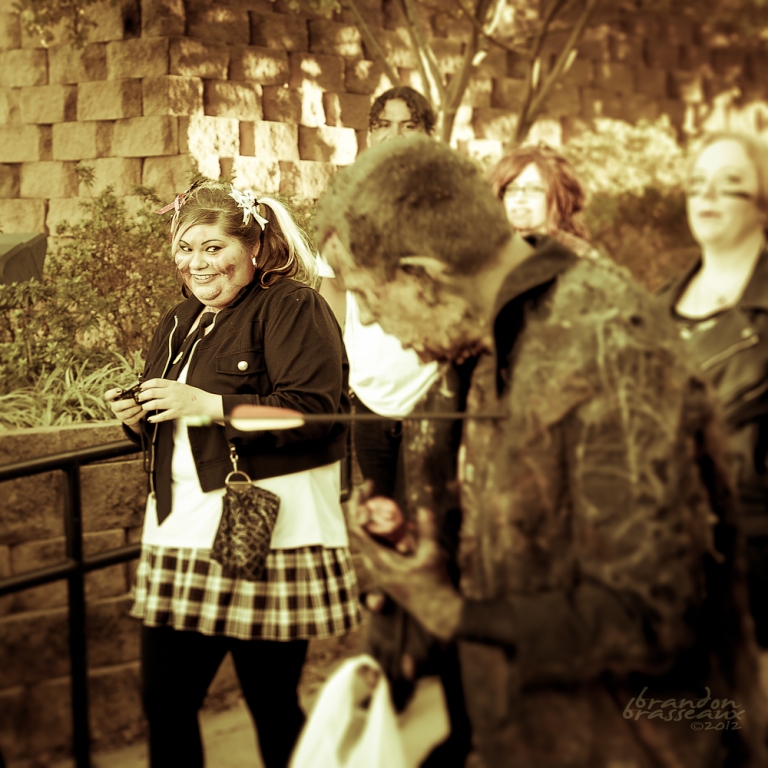 And a band to boot. An apparent cross-dressing zombie punk band.

And two more of my favorites.

7 thoughts on “Zombies Reaching Out in the Community”